Growing With Our City 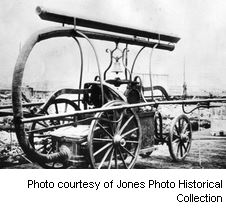 As the City grew, increased hazards required more specialized and up-to-date equipment. The fire department initially worked with a hand drawn pumper affectionately given the name “old tiger.” In addition to tiger, a horse-drawn 1902 Metropolitan steam pumper extra first size (1100 gallons per minute), a horse drawn ladder truck and a chemical/hose wagon were later added. During the horse drawn era, “the hitch” was practiced and trained on daily and what a sight it was.

A big gong would strike three times and with the first tap the room was a flood of light. Three stall doors would open and as many horses with names like Prince, Jim and Stockings would dash out and take their places under their swinging harnesses. Collars were thrown, lines snapped in and the driver would take his place in the seat, simultaneously pulling a rope and pressing a lever with his foot. The big doors in the old city hall station would swing open; the harness hangers would release and fly up to the ceiling and off they would go.

The engine, ladder and hose companies could usually push off in less than 45 seconds.

In keeping with the growing requirements of the city, the department began purchasing its first motorized equipment. By 1915, the last of the horse drawn equipment was retired and the department became entirely motorized. This trend has continued and today the equipment is all of the most current design. From 1966 to 1982 there was one first-line fire boat that was in operation at the department. The craft was kept on a trailer and quartered at Station 2 in South Aberdeen. Pumping capacity was over 2000 gallons per minute.

In the mid 1920s the department had 3 stations and approximately 40 Firefighters protecting 10.5 square miles of city. The headquarters station was located within city hall at Market and I Streets. Station 2 was located at its current location at Curtis &Clark in south Aberdeen, but faced Clark Street Station 3 was placed at Heron and Garfield in the west end where the Aberdeen Water Department is now situated. By the late 1940″s, the number of stations was reduced from 3 to 2 by the elimination of the west end station.

Water Supply for early firefighting at first were pits or wells being dug that allowed them to fill with salt water. One pit was near Heron and I and another in the alley between Heron and Wishkah on G Street. A few years later, a steam pumping station on River Street provided for a water pipe to supply water on Heron Street between K and F Street. 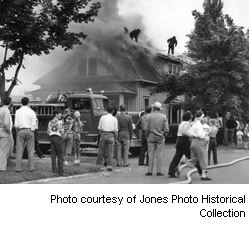 The cities population of the protection area was 20,000 in 1950 as compared to 16,500 currently. The department now serves areas outside city boundaries with Fire and EMS service. One of the greatest assets to fire ground safety and efficiency came with the advent of two-way radios. Previously, fire crews had to check in through telephones or use the fire alarm telegraph system to communicate and inform the alarm office of their status and movement. With motorized equipment, fire chiefs were now arriving on scene in a timely fashion, but not much else had changed. Orders were still being shouted through trumpets or being delivered by runners.

By 1950 2-way radios were common. In the 1970s, the use of portable hand-held radios added even more efficiency and safety for fire ground crews. By 1973, implementation and use of better protective clothing, lighter weight hose and couplings; and replacement of the old filter masks with self-contained breathing apparatus was completed, further increasing safety and efficiency.

In 1972 to 1973 the first Fire Department Emergency Medical Services Task Force was formed to investigate and report the feasibility of transporting patients by fire departments. Doctor Juris Macs was instrumental in its formation. In 1973 the department responded to 292 aid calls. Today the number is over 4,500.