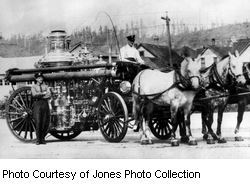 Aberdeen has grown from a small town, protected by a Volunteer Fire Department, into a larger city that is protected by today’s highly trained, professional fire department.

It had its beginning in October of 1890 with the consolidation of the Pioneer and Wishkah Hose Companies and the Relief Hook and Ladder Company into the Aberdeen Volunteer Fire Department. Today the department recognizes 100 years as a professional department.

In late 1907 there were a number of internal conflicts occurring between the city, its fire department and the business community. Organizationally, things were a bit different in that time. In addition to its roster of active firemen, the department had a roll of businessmen who acted as honorary firemen who also contributed financing for the department. Their role had a huge influence in the internal workings and politics of the department and in turn they expected to receive better efficiency and the protection of a 1st. class fire department.

Keep in mind that during this time “Black Friday” was still fresh in the minds of many people, especially the downtown business merchants.